“Four centuries ago Claudio Monteverdi was the first composer whose music recounted human drama, love, suspense, and dreams. More than fifteen years ago Giacinto Scelsi composed a trilogy for solo cello — The three ages of man : youth-energy / maturity-drama / old age-memories… I have chosen to transcribe Monteverdi’s madrigals for three cellos and to juxtapose them with chapters of the trilogy. Two lifelines are thus sketched out ; two musical compositions cross paths, each an echo of the other — sometimes in opposition, sometimes surprisingly close, especially when old age draws near. This work is a continuation of Beginning with Monteverdi, which was both given in performance and recorded on a compact disc (2001) bringing together works of Monteverdi, Berio, Kurtag, Dutilleux and Dusapin.”

IMAGINARY CONVERSATION
Is the notion of time important in VITA?
There are two parallel lines that incarnate time. Two different sorts of time.
One line connects the sixteenth to the twentieth century.
The other starts from the beginning of a life until its end…from youth to old age.
Perhaps between the two there exists a play of mirrors.

Is it a question, then, of several lives?
Yes. In the beginning I thought so. But today, on listening to what we recorded last fall in the sequence I had imagined, Angioletta and Angel became one and the same person. The Angioletta of the sixteenth century becomes the Angel of the twentieth.
Inspired by the madrigals, their (his and her) story was born.

Like a book then?
Perhaps. A book that brings together two geniuses outside their own times : Claudio Monteverdi and Giacinto Scelsi.

So tell us the story of Angioletta-Angel…

THE STORY OF ANGIOLETTA-ANGEL
MONTEVERDI / Avoce Sola Se i languidi miei sguardi
Imagine Angioletta still very young. She has decided to write a letter, one which will reveal a love that has entirely overwhelmed of her. To whom it is addressed we do not know. What is expressed is the intensity that emanates from this being who is about to bare her heart, to unlock a secret. It is alone that she is to experience the fragility, the nudity that comes with revelation.

MONTEVERDI / Ardo
We encounter Angioletta a few years later. She is perhaps more aware ; at any rate she has lost all innocence. In her song appears the vision of the suffering that a reply to what she burns to express might bring down on her. The words do not issue from her mouth, they remain fixed on her lips. They burn her and burn her…

SCELSI / Triphon II
Angel moves through adolescence. The time of experience, the time when everything is lived with an intensity that verges on pain, like a blinding glare from a light too strong. The heights scaled are vertiginous. Nothing blunts the sharp edges. All is absolute, all is vital : a question of life or death.

MONTEVERDI / Mentre vaga Angioletta
Here is Angioletta in the madrigal that bears her name. Angioletta whirls, entirely absorbed in the play of seduction. She begins by wandering alone, purposeless; then little by little, she takes up the dance – in turn giddy, motionless, gyrating, made of murmurs, cries, broken phrases, fractures. She proceeds by imitation, teases. She strives to see herself in the eyes of others. She dances, mirrored in her own reflection, a dance of seduction. Until folly sets in.

MONTEVERDI / Non Morir Senequa
But all of a sudden she hears, at first as a whisper, then more and more distinctly, the words “do not die”. This slow but unrelenting intensification appears as destined to bring her back to herself, to hold off, whatever the cost…

SCELSI / Triphon III
Angioletta’s reply will be a crashing wave of sound, of energy, of rebellious force, as if to liberate her from the condition that held her prisoner. It is an uncontrollable energy, necessary if the passage to adulthood is to take place.

MONTEVERDI / Altri conti d’amor
And adulthood it’s perhaps discovering another countenance.
Angioletta is face to face with the power of an other’s presence.
The other, a being loved, but who remains irremediably other.
An other that will perhaps confront her, on occasion accompany her, surprise her also. But is only once the fear (of her flesh) is put aside that she will consent to run the risk of union.
The union of two souls.

SCELSI / Dithome
Imagine that we are roughly half way along the line of life. The moment when one takes a glimpse at the past so as to draw the strength essential for the present. Images pass in review. Angel thinks back on solitude, on the wanderings, on the encounters. He thinks back on the energy that bordered on ecstasy. He thinks back on transcending the possible.
Here perhaps is the dichotomy, the “dithome” : a constant back and forth between the forces taken at their source and the vibrations of the present. And by the same token the birth of a new equilibrium created by the sense of time that passes. An equilibrium possible with the dawn of maturity.

MONTEVERDI / Hor Ch’el Ciel e la Terra – extract
It is material made of sound, a state of immobility. Heaven and earth have fallen silent. And even the wind. One is suspended, given over to the bewitching harmonies.

SCELSI / Ygghur I
Then comes the time of old age. Sounds grow faint. Gestures are slower. Each word means a voyage to the heart of sound. To where beats the heart. Matter dissolves to make way for timbre, for color, for vibrations, and for breath.

MONTEVERDI / Il combattimento di Tancredi
And this briefest of times that she knows remains hers, it is Angioletta, now appeased, that prolongs it to eternity. 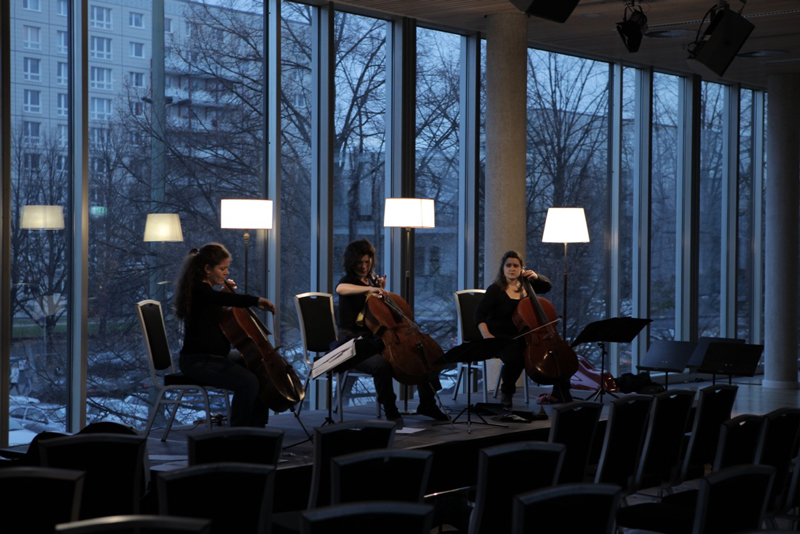